Heart rates and temperatures rise, but for a great cause

Heart rates and temperatures rise, but for a great cause On Sunday, September 7, more than 150 firefighters from Australia and New Zealand took part in the inaugural Melbourne Firefighters Stair Climb, which saw career and volunteer firefighters climb 28 flights of stairs to the top of Crown Metropol hotel in full firefighting kit weighing 25kg.

Inspired by competing in the Auckland Sky Tower Stair Challenge, a Melbourne-based team went about organizing their very own firefighter-exclusive stair challenge and the Melbourne Firefighter Stair Climb was born. The event simulates the actions of a firefighter entering a burning high rise building, with competitors, donning 25kg of kit, including full structural firefighting protective clothing, and Self-Contained Breathing Apparatus.

As one of four sponsors, we took the opportunity to demonstrate Tait BioLink at the event. Three firefighters taking part in the Melbourne Firefighters Stair Challenge wore the Tait BioLink as they climbed the tower. From the lobby of the hotel, the Tait teams were able to keep an eye on the firefighters’ heart rate, breathing rate, core temperature and posture to make sure they stayed within safe ranges as they raced to reach the 28th floor. Leading Firefighter and Chairman of the Firefighters Charity Fund Melbourne, Mick Whitty, said, “I am really looking forward to seeing what my body was doing; the Melbourne Firefighters Stair climb is a pretty stressful exercise, so you are going to see what happens when your body is pushed to the limits.” Heart rates in excess of 200 beats per minute were recorded by Tait BioLink during the event. Tait Biolink Product Champion, Tanmay Bhola, says that Tait BioLink is designed specifically for this type of situation where first responders, as part of their jobs, are pushing themselves to the limit. The Tait BioLink solution can improve health and safety procedures, accountability, tactical decision making and situational awareness by enabling incident commanders with detailed real-time changes and exceptions to staff heart and breathing rates, stress levels, low activity, heat stroke or falls. The Tait BioLink seamlessly operates with existing P25 voice capability using the Zephyr BioHarness™ to send physiological data over the radio network to key decision-makers during incident management. Leading firefighter with the Metropolitan Fire Brigade, Scott McGraw, is an endurance athlete in his spare time and has competed in Ironman triathlons as well as previously taking on the Melbourne Eureka Tower (88 floors) 31 times non-stop which is the equivalent to 51,000 steps. When asked about finishing the Melbourne Firefighter Stair Climb in 3 minutes and 43 seconds he said, “Running up the stairs was brutal, horrible but wearing the Tait BioLink was comfortable and I didn’t know it was on. As an endurance athlete I am obsessed with information, so it was quite cool to know that, that information was public there on the screen and having someone monitor it. I think for extended work, where firefighter health is a bigger issue, it definitely has merit. ”

As firefighters, The Alfred’s Burns Unit was an obvious choice of beneficiary for this charity event. In an effort to reach their $100,000 target and with the event almost coinciding with the anniversary of 9-11, the event set out a fundraising goal of $343 for each participant to honor the sacrifice of the 343 FDNY firefighters. The event smashed their target goals and has to-date raised over $120,000 with donations still coming in. Taken from the website, the amount raised so far is sitting at $121,738

At Tait, we feel proud to be able to support the Melbourne Firefighter Stair Challenge and work alongside the inspirational firefighters who are also dedicated to ensuring safer communities. A special thanks must go to volunteer firefighter Rene Belyus, Country Fire Authority Mt Evelyn and career firefighters Mick Whitty and Scotty McGraw, Melbourne Fire Brigade who had their physiological data displayed for all to see.

Do you know someone who competed? 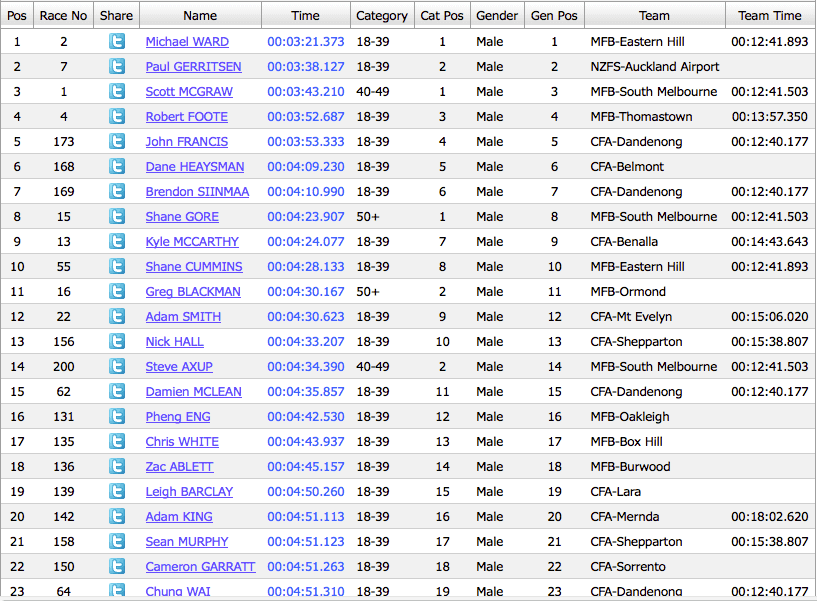 A Tait BioLink Starter pack includes everything you need to get your team up and running. It includes all the required system hardware and software.

Tait engineers and experts will work with you to ensure that the system is set up exactly as you need. Visit the Tait Biolink page for more information, or comment below and we will follow up with you.