But rather than talk about physiological monitoring as part of a critical communications solution, we have been taking it out into the field. Two of our in-field tests were firefighter stair climbs, simulating real life activity – well, minus the actual burning building!

Three fire fighters took part in the Sky Tower Stair Challenge, including an elite team member and a first-time participant, who all wore Tait BioLink as they climbed the tower. The fire fighters climbed the 1,103 steps to the top of Auckland’s Sky Tower in full firefighting kit weighing 25kg.

Engineers stationed at the tower base were able to keep an eye on each participant’s heart rate, movement and core body temperature to make sure they stayed within the safe range as they gave it everything to reach the top of the tower. This event simulates the actions of a firefighter entering a burning high rise building, with competitors donning 25kg of kit, including full structural firefighting protective clothing, and Self-Contained Breathing Apparatus. Again, three firefighters wore the Tait BioLink as they climbed the tower.

From the lobby of the hotel, the Tait teams were able to keep an eye on the firefighters’ heart rate, breathing rate, core temperature and posture to make sure they stayed within safe ranges as they raced. 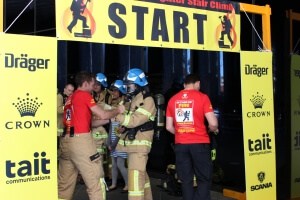 Leading firefighter with the Melbourne Metropolitan Fire Brigade, Scott McGraw, is an endurance athlete in his spare time and has competed in Ironman triathlons as well as previously taking on the Melbourne Eureka Tower 31 times without stopping which is the equivalent to 51,000 steps. When asked about finishing the Melbourne Firefighter Stair Climb in 3 minutes and 43 seconds he said, “Running up the stairs was brutal, horrible, but wearing the Tait BioLink was comfortable and I didn’t know it was on. As an endurance athlete I am obsessed with information, so it was quite cool to know that the information was public, there on the screen and having someone monitor it. I think for extended work, where firefighter health is a bigger issue, it definitely has merit.”

Whether it is a better understanding of an individual’s fitness and limits of endurance, establishing how long a tank of oxygen will last under certain conditions or data-gathering to improve procedures, physiological monitoring can improve the safety of workers in challenging, dangerous or remote environments. When fire fighters are out there fighting blazes and protecting our communities, they’re focused on the task at hand and not necessarily on the physiological stress that they’re under themselves. Even in routine situations, this can be the case. BioLink can automatically detect when an emergency responder is under physiological stress so that the necessary action can be taken to keep them safe.

According to the U.S. Fire Administration, 46.5% of firefighter fatalities from 2007–2011 were as a result of heart attacks. Physiological monitoring of firefighters can provide a significant improvement in situational awareness on the emergency scene, and positive outcomes for workers.

Monitoring provides an objective measure of the wearers health status; it means commanders and support crew can intervene when personnel are in distress—even if they do not yet know it, or deny it.

Other applications for this technology include regular, scheduled physical examinations for workers in harsh, dangerous or remote environments. Instead of workers leaving their duties or work site for the examination, their vital signs can be monitored remotely, as they continue their tasks. This saves considerable time and cost, provides more authentic measures, results in greater work efficiency and creates less resistance from workers, compared with the disruption of the physical examinations.