The Grenfell Tower Fire was one of the United Kingdom’s worst modern disasters. In June of 2017, a fire broke out in the Grenfell Tower; a 23 storey apartment block in North Kensington, West London which set the entire building alight. Tait Communications’ Senior Business Development Manager Richard Russell discusses communications solutions developed in the wake of that event.

As has been widely reported, one of the key pieces of emergency services learning to come out of the Grenfell Tower disaster centered around the use of communications on the incident ground.

One apparent issue in this regard revolved around firefighters’ difficulty in talking to commanders on the ground. While this is clearly not the forum to explore this topic fully as it deserves, suffice to say that evidence was given at the subsequent incident inquiry which has given emergency services across the UK food for thought. With that in mind, this issue’s Future Tech section focuses on a radio solution which, according to its manufacturer, may have gone some way to negating the issues which hampered firefighters during that awful day in 2017.

Developed by Tait Communications, the suite of products in question includes a vehicle device and a wearable, offering the potential to act as a personal area network gateway, in order to leverage multiple bearers. These include LTE broadband, analogue and DMR (or P25) to improve communications in almost any environment, mission critical or otherwise.

Discussing the product and where it fits in with the rest of the company’s communications ecosystem, Tait’s senior business development manager, Richard Russell, says: “The TWX550 wearable device is part of our new TAIT AXIOM Broadband Solutions platform, which we recently launched at IWCE in Las Vegas. It is a suite of cloud-based software services, applications and devices, designed for use in the business and mission-critical environment.

“In terms of hardware – alongside wearables – it includes a vehicle-based solution, the TMX450.The software piece includes workflow applications, integrated into the TMX450 to enhance productivity.”

A decent summary of TAIT AXIOM’s raison d’être can be found on the Tait website. According to the online description, the system exists to “enable workers with applications that help them collaborate, coordinate resources and stay informed. [Using the technology, organizations can] invite everyone into the conversation to talk, message, share location information and exchange data regardless of network or device type.”

As mentioned, the focus of interest in this article is a specific part of the platform designed, in essence, to provide mission-/ business-critical users with a broadband-enabled personal area network. Going into greater detail about that part of the solution, Russell says: “The concept revolves around the ability to connect groups of users using multiple bearers at the same time.

“We have an application – Tait PTToX (Push To Talk over X) – designed to be installed on a smart device. During a demonstration I gave at BAPCO 2021 in October, I used PTToX to communicate from a ruggedized smartphone device over Wi-Fi and via an internet connection to our UK-hosted TAIT AXIOM PTToX server. Cellular could also have been an alternative. The signal was then pushed out over LTE to one of our TMX450 unified vehicle devices, with minimal latency.” Going into greater detail about the part which the TMX450 has to play in this, he continues: “The device contains a Linux operating system, which has a number of applications. For instance, its modular form includes long-range Bluetooth, dual SIM LTE modem as well as Ethernet and Wi-Fi connectivity. Traditional radio technology includes analogue, and DMR Tier 2 and Tier 3. “With the signal sent, it’s then a matter of choosing the appropriate channel or talk group, depending on the user. Additional connectivity via the ‘PTToX Bridge Mode’ application links the TMX450 to traditional handheld radios on the ground, via the LMR [VHF or UHF] bearer.”

According to Russell, Tait anticipates that the solution will be rolled out in a variety of business contexts. One of the most obvious use-cases, however, is to help improve site-specific emergency services communications.

Going back to the subject of the Grenfell Tower disaster, is it clearly something which is very much on Russell’s mind, particularly when it comes to development of the technology described above. Indeed he believes that if the solution had been available at the time, some of the issues around communication may have been lessened.

Having asked him to outline why this is the case, he begins by providing a general refresher on current Fire and Rescue Service procedure, entirely outside of the context of the response to Grenfell. “UK fire and rescue services use a variety of different communications solutions during an incident,” he says. “They currently leverage TETRA in the first instance, thereby allowing the control room to talk to the fire appliance on scene and vice versa. At the same time, a separate radio solution will likely be used on the fireground itself. “The upshot of this is that the firefighters on the ground can’t easily communicate directly with the control room. There’s a fundamental disconnect, in other words.” He continues: “In operational terms, this means that someone has to spend time monitoring the TETRA radio in the cab, writing down the information as it comes in. It then needs to be transferred to a third party, who will in turn deliver it to the appropriate person on the bridgehead. “That information obviously must be understood in the first instance, transposed correctly and finally delivered accurately. At the same time, the recipient of the information must be accessible, which is not always necessarily the case on the fireground. This all takes valuable time.”

In contrast to this, the Tait solution’s ‘multiple bearer’ approach is designed to ensure a consistent communication chain at all points during an incident. At the same time, again according to Russell, deployment of the technology might also open up new opportunities for situational awareness while on scene. Discussing this, he says: “Fundamentally, this part of the TAIT AXIOM concept enables those working in the control room to convey voice information via an LTE connection to the incident itself. “This information is then re-broadcast from the command vehicle in real time, with – again – very little latency.

In terms of the fireground, it would then be re-broadcast over the UHF bearer to both the firefighters on the ground and at the bridgehead. “That being the case, it could also conceivably enable firefighters to receive information from the person actually reporting the incident. The member of the public in question could give incident information via the controller, as well as details about the location.” As well as showcasing TAIT AXIOM at BAPCO in Coventry, Russell also gave a presentation looking at the adoption of both new technology and attendant new ways of working by the UK emergency services. 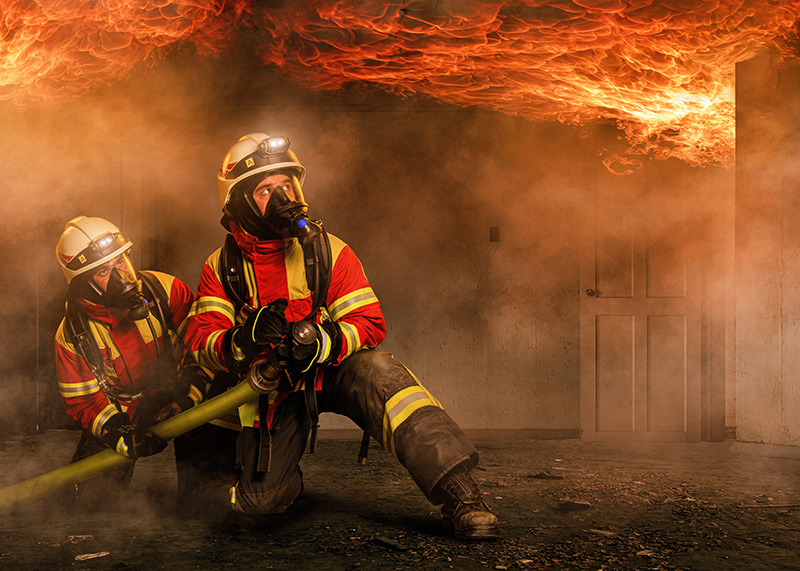 Part of this presentation – titled The Shock of the New – examined organizational culture itself across public safety organizations in the UK, something which he believes will likely evolve and change. He says: “What I’ve gathered from emergency services is that there’s always a weighing up of risk. At the same time, there is also an element of balancing that risk with generational changes of attitude towards the adoption of new technology. A deep, natural energy [within organizations] to say ‘Yes, we need to do this’.

“This [change in attitude] has to go hand in hand with fire and rescue services having a willingness to take on board the opportunity to drive the technology themselves. That often requires someone – an internal sponsor – to drive that area of work within particular organizations.” As well as being an appalling human tragedy, the Grenfell Tower fire will also likely stand as a key moment in the history of the UK fire and rescue service, containing as it does important learning around both the use of technology and general operational procedure. That being the case, manufacturers such as Tait have a crucial role to play in ushering in a safer tomorrow.

Find out more about what TAIT AXIOM Broadband Solutions have to offer.