The Toughest of Tait Tough

The Toughest of Tait Tough 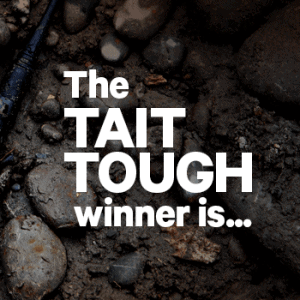 By now you’re familiar with our Tait Tough video series, where we put Tait radios through the most punishing tests we can devise to demonstrate their ruggedness and dependability. But there are plenty of real-world examples too, as shown in our recent Tait Tough reseller and partner competition.

Over the past five months we asked our partners around the globe to send in their experiences and stories about Tait Toughness and selected a few finalists and one winner from a number of quality entries:

Steve Kolka was out visiting a remote fire lookout tower in Tasmania, when he thought it might be a good opportunity to test out the toughness of Tait portables. He dropped one from an observation tower onto rocks 20 meters below. The radio bounced off the rocks but survived suffering only minor cosmetic damage, and remained fully operational.

During a deployment in Indonesia, a user dropped his Tait portable into a mud puddle and couldn’t grab it before a heavy equipment vehicle ran it over. Amazingly, despite a broken antenna, the radio itself was still in good condition with only a few scratches, and with a replacement antenna was working again. A Tait TP9435 portable used by a Los Angeles fire department was left inside a burning house. Upon recovering the radio, the antenna was badly burned, the belt clip and the control knobs had heat damage, and the cord on the speaker mic was melted. It was very obvious that the radio got hot, yet it still boots up, logs onto the system and works.

After accidentally dropping a Tait TP9100 portable while climbing up the boom of a dragline crane at an Australian mine, the radio fell through the stairs, bounced off three steel frames and fell approximately 30 meters straight onto rocky dirt. After re-attaching the battery pack that became dislodged on impact, the radio sprang right back to life.

Oelmann Elektronik GmbH – “All in a day’s work…nothing special!”

Tait portable radios at Oelmann Elektronik have survived a bevy of unfortunate incidents, including falling off a cliff in Caucasus Mountains, falling out of a car on the move, being left out in the hard rain and under the snow, being charged with inadequate voltage, being misprogrammed by untrained personnel, and even being used as a hammer.

Syed Atif from Baud Telecom reported that a radio accidentally dropped into the ocean was recovered after 48 hours in the water, and after some contact cleaner was applied to drive out any remaining seawater, he was shocked to find the radio working fine upon reassembly. Another user lost his portable radio for six months in the rubbish, but with a fresh battery it was good to go again.

And lastly, our grand winner:
Colvins – “A Long Winter” At the end of a wet and miserable winter day, a forestry gang working on the East Coast of New Zealand decided that rather than carry their backpacks with Tait portables, they would clip them onto the “Skyline” (a wire rope connected to the hauler that pulls trees back up the hill). Halfway up, the Skyline jerked, causing the radio to slip out of the backpack and fall to the ground about 20 meters below. As luck would have it, it was above a flooded creek that was running into mud ponds.

Several months later, the forestry gang foreman was again in the area after the weather and ground had dried out. They had tied a marker above the pond where the radio fell so it was easy to locate the area, and with a bit of digging he was able to easily spot a bright yellow Tait radio in amongst the rubble. The radio was brought back to the workshop, and with a quick cleanup and new battery and it was fully operational again.