The FCC has announced that narrowbanding 700 MHz networks by 2017 is no longer mandated. In this article, Tait Public Safety Solutions Manager Dr. Russell Watson looks at who will be affected, and what the implications are. 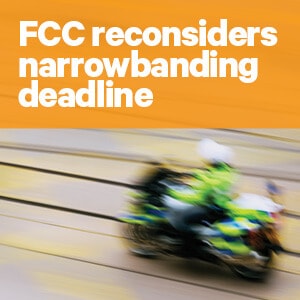 Towards the end of 2014, the FCC announced that the 2017 narrowbanding implementation deadline was no longer viable, or indeed necessary. This decision was preceded by FCC granting a number of waivers to entities who had argued variously that:

The decision to lift the deadline reinforced a number of these arguments put forward by the waiver applicants. According to the text of the FCC’s report and order, removing the 700 MHz narrowbanding deadline requirement “will enable licensees to extend the life of existing systems and will provide public safety with greater flexibility in determining the optimal future use of the band.”

So who is impacted by this change? In the US, the 700MHz band is used by Public Safety organizations. Among urban agencies, less than twenty percent use 700 MHz and in suburban areas, less than ten percent use it. While rural counties outnumber the more densely-populated counties by a ratio of approximately seven to one, the number of rural agencies using 700 MHz is even less.

So the vast majority of agencies are utilizing other bands and, indeed the 700MHz band has often been deliberately avoided by agencies looking to put in new trunked systems, purely on the basis of the ultra-narrowbanding regulations.

Commonly, rural agencies tend to use VHF conventional systems, which, while they may have their own spectral congestion issues, these have not been addressed by the FCC ultra-narrowbanding regulation.

Other agencies do experience congestion in more densely-populated areas, but as we can see, the vast majority did not have a spectral congestion issue or were not covered by the regulation.

So the 2017 mandate meant that many agencies were effectively being forced to solve a problem that didn’t exist for them, or they were able to avoid the regulation.

The industry solution to the congestion problem for Public Safety was the greater spectral efficiency of APCO P25 Phase 2, offering effective 6.25 MHz channels via TDMA (Time Division Multiple Access). There are agencies already in varying stages of the Phase 2 procurement process, and it is likely that some of these may now be delayed, to meet more comfortable budgeting and implementation schedules.

However, while the pressure is off as far as the time scale is concerned, competitive cost, future-proofing and the promise of greater efficiencies remain. In future, owners of P25 Phase 2 systems can expect: