A look back on 25 years of commissioning MPT Trunked networks around the world.
By Jason Cox, Senior System Manager, Tait Communications. My first real commissioning trip was to China in the early 90s. We were providing MPT 1327 networks to the Gong An (Chinese Civil Police). The first Tait MPT networks used an EPROM (Erasable Programmable Read-Only Memory) to store all of the programmable parameters and firmware.

These EPROMs needed special programmers to program them, and they needed to be reprogrammed every time you made a change. Luckily, EPROMs were erasable. Unluckily, though, it took a good four hours under an ultra-violet lamp to erase a single EPROM. This meant carrying a large quantity of EPROMS, an EPROM programmer, and a special lamp in your toolbox.

By the time I had made my third trip to China our networks had grown in size and so had my toolbox. On earlier trips it would fit neatly inside my suitcase, leaving enough room for a few changes of clothes and an emergency supply of Snickers bars. Now, my toolbox had become big enough to travel on its own. Ever so nervous of arriving at my distant destination with no tools to be seen, I had split up my precious EPROM programmer and EPROMs and would keep those with me, allowing the rest of my tools to do battle with the baggage handlers on their own.

Tait was now supplying wide-area trunked radio networks—multiple networks supporting large numbers of sites connected together. At the heart of these networks were the brand new Sparc Classic workstations from Sun. We used these for our network controllers, as well as for the network management. At the time, they seemed so advanced compared to the DOS-based management software of previous-generation networks. Our software ran on a windowed environment with multi-tasking and TCP/IP networking—two years before any of us would ever see a copy of Window 95. Although the software was very flexible, you needed a degree in Unix to customize and configure it. And there was no way to “Google” a Unix command; it would be two more years before Larry Page and Sergey Brin would invent their now-famous PageRank algorithm. So, as well as programming EPROMs for our base stations, along with channel and site controllers, Tait engineers needed to know how to build regular expressions and write scripts to run billing programs or display information about the operation of the network. There were no digital PDF files for manuals, and there wouldn’t be for another three years or so. All manuals were in hard copy and they were huge.

As Tait MPT networks became more feature-rich and capable, we were installing larger and larger networks. On one particularly large network we included modular buildings for the equipment huts at the remote sites. The buildings were a flat-pack design for easy shipping but assembly required a rivet gun and some rivets. Unfortunately, there were no local hardware stores where this particular network was situated. So, into my toolbox went a heavy-duty rivet gun, an array of rivets and other hand tools. I was pleasantly surprised when I was waved through customs with my luggage trolley piled high with enough goods to start my own hardware store.

As networks became larger, the pressure was on to try and make the equipment smaller to save precious cabinet space. One engineer came up with the idea of removing the keypads and LCD displays on some of our hardware, and moving it to an external handheld unit. That was great for saving space on a site, but it was another box to add to the list of tools. My toolbox now required its own Burro (small donkey) to get to a site. 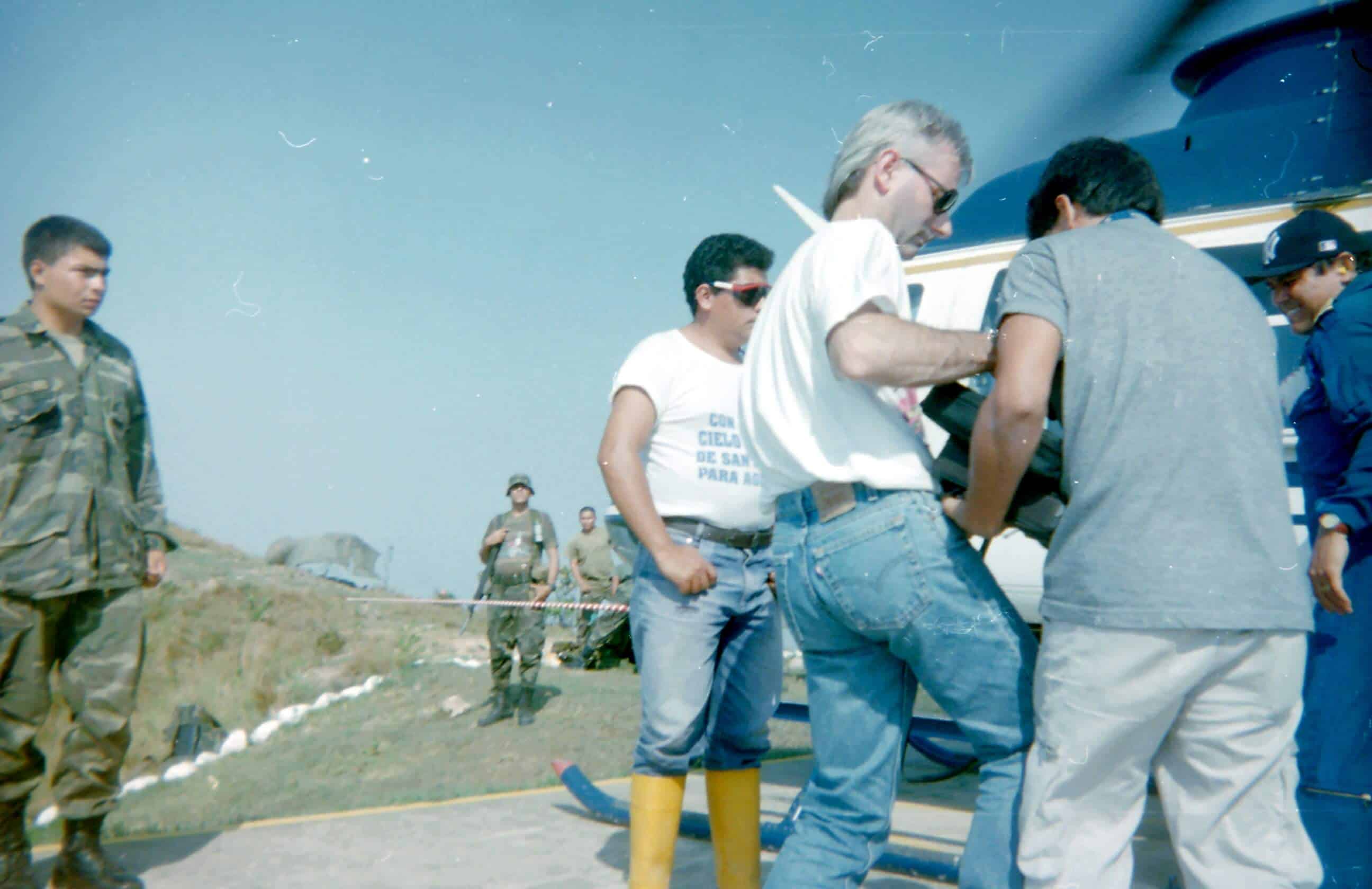 In the new millennium, our MPT networks went through their third design phase. We were still using Sun servers for our nodes, but the popularity of the PC meant that our network management software was available for Windows. Software came on CDs and floppy disks instead of magnetic tape and EPROMs, and the large handheld boxes for configuring site equipment were replaced with laptops and an array of serial leads. Of course, you needed a different lead for each device, but at least they were small enough to fit into your laptop bag. The early 2000s also saw a change to our base stations. The TB8100 Base Station had its own software and calibration box, which would allow you to re-tune the base station in the field with just a laptop—without the expensive (and heavy) test set. The TB8100 also had something unique at the time: its own internal programming language called Task Manager. Where previously it was common to make up special plugs and leads to turn a base station into a repeater or to add in a tone panel, this could now be achieved from the programming software of the base station itself. By using an array of “if-then” statements, you could program the base station remotely. Never again would I need to solder a special plug while sitting in the snow on top of a mountain site, or fumble with jumpers on the back of a rack.

But it wasn’t just our base stations that were getting smarter. Our new digital audio switches lost their EPROMs too, in favor of being programmed from a laptop. They could also measure the audio circuits and display the results on the network management PC, removing the need for a separate audio test set.

For a brief period of time my toolbox was now small enough to be classed as carry-on luggage. This would come in handy as Tait deployed sites high in the mountains of Columbia, where I had to fly to work every day in a helicopter, or in Borneo and Sumatra, where the only way to the top of the mountain was on foot. In 2005, my toolbox and laptop were stolen from my rental car the night before commissioning a 112-site network. I explained to the local policeman that I wasn’t really concerned about the laptop, but it was my tools and notebook that I needed back. And besides, what use would they be to someone who wouldn’t even know where to stick a Krone tool? He advised me to check the rubbish bins around the local park. As I dealt with the trauma of having to replace my beloved tools, I looked closely at what I really needed. Our networks had changed so much over the previous 20 years but my toolbox really hadn’t. I had an old list of tools that we used to recommend to our clients when they purchased a network. I went through pages of part numbers—did I really need all of that?

By the time the last of the 112 sites was on air, my toolbox was the size of a pencil case and it could fit inside my newly purchased laptop bag, along with the laptop. It still contained everything I needed and only a few extra tools for those just-in-case situations.

It’s now coming up to 25 years since I worked on my first MPT network, and Tait has released its fourth generation of TaitNet MPT networks and recently, the new DMR networks. No longer do we need a special box to program a base station, nor do I need a bag of special programming leads. I don’t need to know how to use Unix (although we still use it under the hood), and I can’t remember the last time I used a “regular expression” in anger.

Today’s Tait networks are driven using nothing more than the web browser you’re reading this article with and they’re not even tied to a particular operating system. My toolbox today consists of a small, lightweight laptop and a Cat 5 cable. The base station is web-driven, from calibration to programming, to monitoring and diagnostics, as is the node controller. Even the manuals are accessible from the same web browser and there isn’t an EPROM in sight.

Our base stations are now capable of calibrating themselves every time they transmit. Expensive test equipment is replaced with software running on a laptop or built into the equipment it was designed to test. I expect that it won’t be long before a client can receive a piece of network equipment, take it out of the box, plug it in, and the network will configure everything itself before simply emailing the client the completed commissioning documents.

But until that day comes, I’ll keep my toolbox packed and ready for the next adventure.

This article is taken from Connection Magazine, Edition 3. Connection is a collection of educational and thought-leading articles focusing on critical communications, wireless and radio technology.